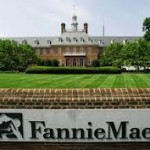 To many, this is an unthinkable achievement, and their best performance since 2006, right before the mortgage and housing collapse. The fortunes of the company, which is 80% owned by taxpayers after being seized in 2008, have been lifted by the recovery in the housing market. As the housing market recovers, the mortgages it owns or backs have increased and Fannie Mae’s bottom line has improved. Last month the company reported a record $17.2-billion annual profit for 2012

Fannie Mae also said it is close to repaying taxpayers for the cost of their bailout, which was the most expensive of any single company. The Congressional Budget Office (CBO) says the real cost of the federal government guaranteeing the business of failed mortgage giants Fannie Mae and Freddie Mac is $317 billion — not the $130 billion normally claimed by the Obama administration.

Fannie Mae was able to achieve this by two factors, first it applied tax credits that it had saved from its losses on delinquesnt loans, and the other is a hidden tax (called G-Fees), that it applies to every single new loan. So essensially, all the new loans are paying the G-Fee Tax to make up for all those people who defaulted on their old loans.