Closing costs have NOT gone down!

St Paul, MN:  Recent news releases from the government have been claiming that mortgage closing costs have gone down 7% due to new mandated government procedures that make it necessary for lenders to be more accurate when making estimates for borrower’s closing costs. 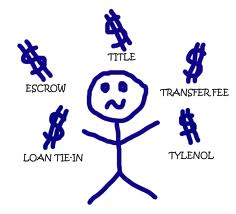 The spin masters are wrong on two fronts.

First, most lenders were already accurate in their initial closing cost disclosures, and the items that caused them to re-adjust their estimate later on are still there.  The only significant difference is the incredible burden of new paperwork, and disclosures that make absolutely no difference to the customer, or their bottom line.  For example, the old easy to read and understand one page Good Faith Estimate has been replaced with an incredible confusing three page Good Faith Estimate. The new form has been so badly received, that the Consumer Financial Protection Bureau is already working on a new form to replace the new form! Furthermore, re-disclosing forms for minor changes with mandatory wait times before a client can close on their loan has done more harm than good, and has significantly increased lender costs, turn times, and client frustration.

Secondly, due to the new rules, industry insiders have proven that closing costs have actually risen about $1200 per client.  Where the government spins it is that under the new rules, lenders are now forced to give home owners more “lender credits towards closing costs”. This sounds great, and it does actually lower the OUT-OF-POCKET average closing cost for many people. But, what is actually happening is that the client now has reduced options, and is being forced to pay more over time with a higher interest rate in exchange for those lender credit.

The bottom line?  Don’t be fooled by the spin. The government has mandated more rules, more paperwork, and less consumer choice all while claiming victory in reduced costs. The reality is it cost consumers significantly more in a higher mortgage interest rate over the length of the loan than they ever saved in initial closing costs.